How many plastic toys end up in the Ocean?

Children love toys of all shapes and sizes and they aid their learning, development and social skills – they are such an important part to any child’s up bringing. In this blog we will look at the issue of plastic pollution in relation to children’s toys. I think that it is fair to say that most people are aware of the plastic pollution problem that we are currently facing, however, it is a mis conception that the problem is purely down to ‘one use’ bottles and packaging. Yes, this is a major contributor but it is far from the whole story. If you have ever done a beach clean, you will find all sorts of plastic items and it is highly likely that you will find a children’s toy or two. I’ve spent hours trawling statistics available through other studies and have made a couple of assumptions (erring on the side of caution) specific to the toy industry where the information is not available. From this i’ve attempted to answer the question in the title of this blog.

How much plastic does the toy and game industry produce in the UK?

How many of these plastic toys will end up in the ocean at the end of their life?

The major issue with the high number above is the fact that due to the nature of the materials and their construction, the vast majority of these toys cannot be recycled.

0% of UK plastic waste is mis-managed. i.e if you put non-recyclable plastic in a landfill collection, it will end up in a contained landfill with very small risk of this ending up in the sea. In some African and Asian countries the figure of mis-managed plastic waste is as high as 85% but this is a topic for another day. So that being said, the risk of plastic pollution in the UK comes from ‘litter’ and has a very high risk of ending up in the sea if it is littered within 50km of the coast. In 2010, 67,549 tonnes of plastic was littered in the UK within 50km of the sea, this is 1.4% of the total plastic waste of 4.93 million tonnes (this total includes recycled, incinerated and discarded). The 1.4% covers all plastics so I will assume that the rate of littering for plastic toys is lower so will call it 0.7% to err on the side of caution. The statistics above are from a study by Jambeck et al (The 0.7% is my assumption).

0.007 x 200,340 tonnes = 1402. From this, we can estimate that 1402 tonnes of the plastic children’s toys sold last year in the UK will end up littered within 50km of the coastline in the UK at the end of their life (whether that be in 2, 5 or 10 years time). If half of that was to end up in the sea, that would be 701 tonnes or to use the London bus analogy, that’s the same weight as 58 London buses. Quite scary when you think about it, especially considering buses are made using steel. 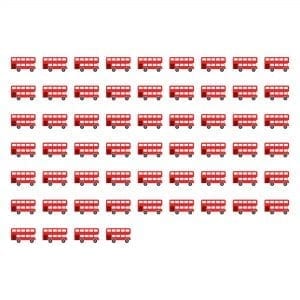 How much plastic waste is already out there in total?

The figures above are the UK TOY INDUSTRY ALONE – worldwide and plastic as a whole, it’s estimated that 150 million tons of plastic is already in the ocean and this is set to increase at around the rate of 8 million tons a year – it is a well known fact that by 2050, there may well be as much plastic in the oceans as fish by weight.
According to National Geographic, there has been 6.9 billion tons of plastic waste since its inception in the 1900s. Only 9% of that has been recycled which leaves a staggering 6.3 billion tons somewhere on the planet – only up to 50 years into the 400 years it takes to biodegrade.

According to Jambeck et al, in 2015, 55% was discarded (thrown in the bin). The rest was recycled or incinerated. 3% of this 55% ended up in the ocean. This is through a combination of mis-managed waste in developing countries and littering across the globe. In some countries, mis-managed plastic waste is as high as 85% and in some, it is 0%. Unfortunately there is littering in every country – taking all this in account, the figure is 3% of all discarded waste globally will end up in the oceans.

The Pie Chart below illustrates disposal methods of ALL plastic in 2015. Statistics from Jambeck et al 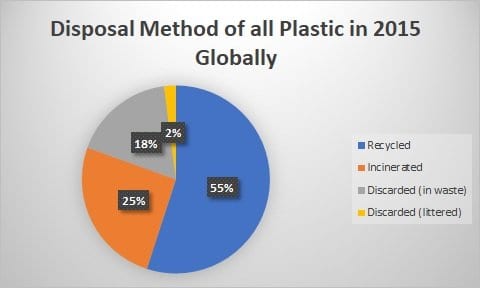 Why have we got into this position with plastic?

Plastic has enjoyed a meteoric rise since its inception in the early 1900s and its real growth in the 1950s – it’s easy to see why. When you think about it, it really is a wonder material.. it lasts ‘forever’ and can be moulded into any shape, colour  and thickness to pretty much make anything – quickly and cheaply. In some cases, plastics cannot be replaced and have provided huge leaps forward in technology – think of the aerospace or medical industries for example – plastic really can be a life saver. There is still a huge case for plastic in many areas of our lives as long as it is produced and recycled responsibly. The toy and game industry definitely isn’t one of these and has enjoyed such a rise mainly due to its ease of manufacture and pure economics.

The toy industry has a huge way to go in the fight against plastic – why not take a look in the high street shops of the big national retailers, it is pretty much plastic as far as the eye can see. Toys manufactured from wood or natural rubber can often be a beautiful, long lasting gift that a child will love and is so much nicer for the child to play with – which further enhances the environmental benefits.

Envirotoy was formed with the aim of reducing to the amount of toys produced from plastic down from 90% and to help our planet and also provide children with far superior and natural toys to grow up with. We have a beautiful range of wood and natural rubber alternatives that are 100% plastic free and have no plastic in the packaging. We have also pledged to donate 1% to various ocean clean up projects. 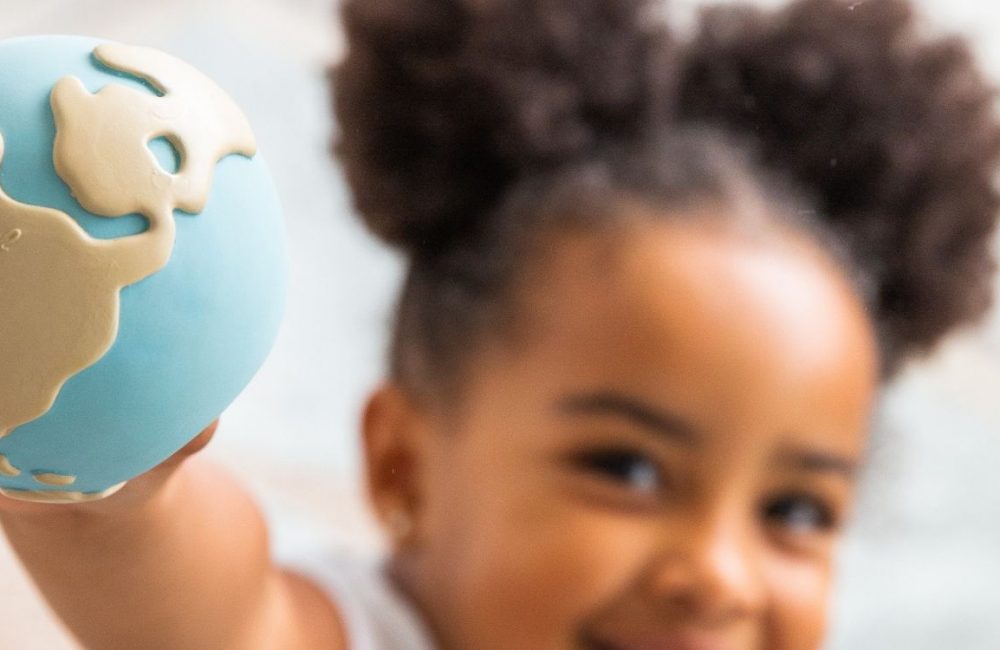